How legume science is enabling industry 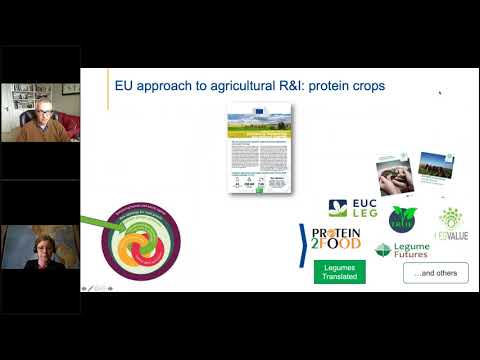 The strategic knowledge of how science is ready and organised to deliver solutions for stakeholders involved in the value chain to increase legume production and uses.

Exploring the success of science in delivering knowledge and how the science is integral to the network standing ready to facilitate innovation in the value chain.

How the science community is ready to engage with industry to create a function network for information exchange.

Introducing the next webinar in the series- The role of policy in the transition of legume production and consumption in Europe.

Provisional programme: Starts at 10am CET (for 3.5 hours)

The EU requirement for legume-based proteins, driven by feed protein needs and increasing demand for plant-based protein foods, is huge and relies heavily on imported legumes (mostly soybean). This is mainly due to the large profitability gap of EU-produced legumes relative to cereals. Reducing this gap is challenging, because the large number of grain and forage legume crops and the modest cropping of nearly each crop in the EU discourage substantial investments by private breeders in these crops. As a result, public research institutions are crucial not only for crop improvement research and pre-breeding, but also for selection of improved varieties to be licenced to seed companies for marketing. This presentation provides examples of recent research findings that are being implemented in public breeding programs in different countries, with the aim to select grain or forage legume varieties with greater resilience against climatic or biotic stresses and greater crop quality. They encompass the molecular marker- or genome-enabled improvement of common bean for resistance to fusarium wilt, pea for greater resistance to broomrape, powdery mildew and seed-borne mosaic virus, low-phytate pea varieties featuring greater iron bioavailability and reduced environmental pollution by phosphorus, alfalfa with improved biomass and forage quality, and pea or white lupin with greater tolerance to drought.

12:20                    Life Cycle Analysis, and its development to assess the impacts of legume use -  Dr David Styles - NUI Galway and Bangor University (Wales). - Specialist in  environmental foot-printing and techno-economic assessment of food, bioproduct and waste management systems, and life cycle assessment

Q: Euan: are you foreseeing a scenario of elite rhizobium strains marketed through coated seed – hence, introduced newly into cultivation at every sowing – or strains that would remain for long in a field (hence, economically more convenient for farmers, albeit requiring proved persistence and high competitive/infecting ability in the longer term)? - Paulo Annicchiarico

A: We will be guided by the industry. We work closely with inoculant companies, and they know best how to apply the inoculants. Our job is to select strains that may out-perform current inoculants in the field; we then share these with our industry collaborators. Specifically with regard to inoculating coated seed, current practice with pulses is to either apply inoculants as a liquid immediately prior to sowing (within 24 hours of application to prevent bacterial cell death through desiccation) or as a peat-based “carrier”. Liquid inoculants are very common for soybean, whereas pea and faba bean inoculants are more commonly applied as peat. This may change, of course, as peat is a limited resource. I think it is unlikely that pre-coated seeds will be sold anytime soon, as the bacteria unfortunately do not survive long enough. With regard to persistence in the field, this is a possibility, but it would need to be monitored each season (our qPCR method should help with that). - Euan James.

Comment: My knowledge of seed inoculant methods (coated seed, peat, etc.) is limited, but my question was indeed whether to contemplate inoculation at each sowing or to foresee the occasional inoculation in a given field (where the latter option would be less expensive for farmers). -Paolo Annicchiarico

Reply: This has already occurred in the USA where soils in the Midwest are considered to be saturated in soybean inoculants. However, in Brazil they still recommend reinoculation every year (this may, of course, be a strategy to boost the inoculant companies profits!). There is even good evidence from Polanad & Germany that soybean inoculants have interacted with “local” bradyrhizobia to produce hybrids that are persistent in soils.

For pea and faba bean, the problem is slightly different as there are already native rhizobia in all European soils, so any inoculants always have to compete with these. The exception is sandy soils in some areas of Europe that may be depauperate in rhizobia; these are probably the best initial “targets” for inoculation.- Euan James

Q: I’m worried about regulation regarding new inoculants on legumes, which seems to be different from one country to another one in the EU. We need to be careful when introducing a new strain, don’t you think so? - Frederic Muel

A: It’s true that each country has it’s own rules. Again, the inoculant companies know this, and it’s their prerogative to tackle this problem as it arises. In the case of soybean, for instance, France will only permit inoculation with certain “local licensed” strains, so any external companies will have problems to enter this market. The funny thing is that all the commercial soybean inoculants contain the same 3-4 strains, and actually differ only in their formulation, so the “French” strains are probably just the same things as all the others anyway!

Or, perhaps you mean we need to be careful in terms of applying non-native microbes into European soils? Again, this is well recognised as a potential issue, particularly when they are definitely “foreign” as in the case of soybean inoculants, but it’s much “fuzzier” for Rhizobium used for pea and faba bean (and clover, vetch etc.), as these legumes are native to Europe and hence their rhizobial symbionts are ubiquitous in our soils. You could argue that the introduction of pea/faba strains from outside Europe should be more regulated, but I think that you would need to demonstrate that they present a possible threat in terms of human, animal, and even soil ecological, health.

You may be interested to know that Pete and I actually have a PhD student who is looking at the impact of “exotic” soybean inoculants on soil microbial diversity. We think that this subject could become quite a hot topic as the use of inoculants becomes more widespread. - Euan James

Q: Moritz and Bob: you mentioned a few cases with manifest economic advantage for legume-based rotations - supporting schemes included (I recall ryegrass-clover cropping, and I think soybean in Romania). Do you know whether farmers in the target regions have a clear perception of this convenience (hence, largely adopting these rotations) or not and, in the latter case, why?  - Paulo Annicchiarico

Q: David: you highlighted the challenges of adapting LCA to agriculture. I often found ruminant meat production classified with an extremely high negative footprint relative to monogastric meat. I wonder whether this is fully justified, considering that ruminants can use/convert feed that is not suitable for humans (unlike monogastric animals), their wastes may have greater value for soil fertility in a circular economy, they can be associated to specific high-quality landscapes and maintenance of human activity in marginal areas, etc. I know this question sound a bit marginal, but its response may affect the relative perspective strategic importance of forage vs. grain legume. - Paulo Annicchiarico

A: Your question re ruminant system LCA is a good one, and often asked (esp. in Ireland where we have plenty of cows!). In short, although there can be some positives around ruminant production at the margins (esp. more extensive systems that actually tend to have a higher carbon footprint based on simple attributional LCA), from an environmental perspective the large land areas occupied by ruminant systems could often be put to much better use sequestering carbon in trees or generating bioenergy given the scale of the climate challenge - all the while creating less reactive N pollution. But I agree with the point you are making - whatever the sustainable level of animal food production is, within it there is a role for extensive systems that deliver other ecosystem services in areas not well suited to other uses, and this is not well identified by simple LCA that favours high-input high-output livestock systems. - David Styles

Q: Trine: how expensive would forage legume-isolated protein be (under optimized procedures) relative to ordinary proteins used for food? And, do you see any perspective potential of these proteins to feed monogastrics – or they would be too expensive relative for example to soybean ones?  - Paulo Annicchiarico

A: Thanks for the question regarding the biorefinary. When we look into economy we need to include all protein streams as I indicated in the presentation to achieve a sustainable  protein price for feeding monogastrics equal to the price of soy. Organic production gives the best model. The fibre fraction needs to be utilized for ruminant feed, but as there is a lack of organic replacement of soy in organic dairy farming in Denmark it is very fine. We have LCA supporting this.

For the food protein we are still optimizing the full process and therefore we do not have the the full picture as technoconomical data it lscking  to say for sure how it turns out. However, we have quite good indicating of a positive economy for this as well, but we need to utilize the rest fraction for monogastics and ruminants. -Trine Kastrup Dalsgaard

Q: Marta :I was very fond of your talk and I think you are doing an amazing job. As I see the picture concerning legumes for food we need to find new solution to change consumer behavior and dietary habits. I will be so happy to discuss this with you as I think your inclusion of consumers is really innovative. Do you have any data showing the effect of your work on dietary habits for the consumer you included in the projects? - Trine Kastrup Dalsgaard

Comment: I just wanted to say, that I’d an interesting insight from the social science work carried out in the EU-TOMRES project (www.tomres.eu, WP4). Here consumers were tested for their willingness to buy a more resource use efficient and environmentally friendly tomato. What was found (for tomato, and Italian or UK consumers) is that marketing on basis of provenance (‘it should be grown locally’) was greater determinant of ‘willingness to pay’ (WTP), and was more important that environmental or nature benefits. Also, on environmental drivers of WTP, German consumers tended to purchase on the basis of GHG costs. UK consumers, nature protection and artificial fertiliser avoidance. I guess the upshot of this, apart from the assumption any products should taste great, it that marketing can be done in many way and that understanding your target market/consumers is key. Also, that “benefits” or “consumer expectations” need ‘stacked’. That is, the more you satisfy the various consumer expectations, the higher the WTP. We’ve seen the similar impacts in TRUE e.g.  with the Arbikie pea-gin product, is has good GHG credentials and this is allied to other (main) drivers, which were ‘provenance’ and the ‘values’ (human, (including cultural and fashion drivers)) presented by the producer/product. The company selling the climate-positive pea-gin were carrying consumers with them on the basis of those values, before the gin (and a vodka) appeared. The product (and innovative science narrative behind it) helped reinforce and consolidate the companies provenanced brand. - Pete Ianetta 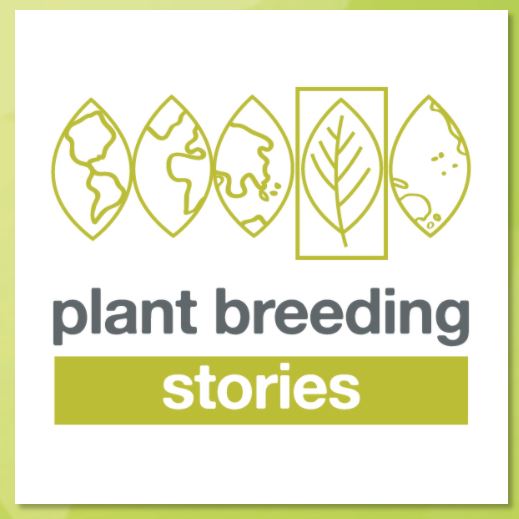 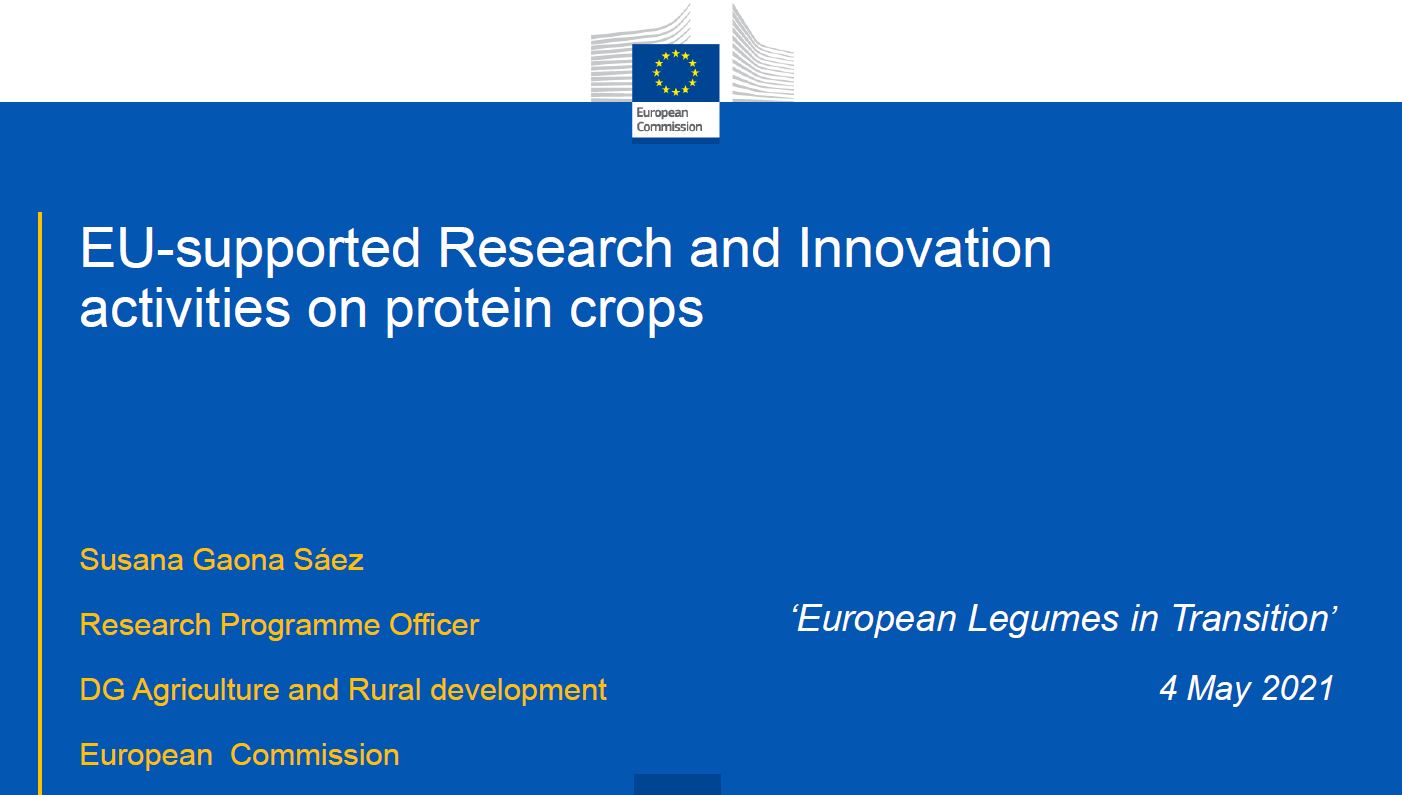 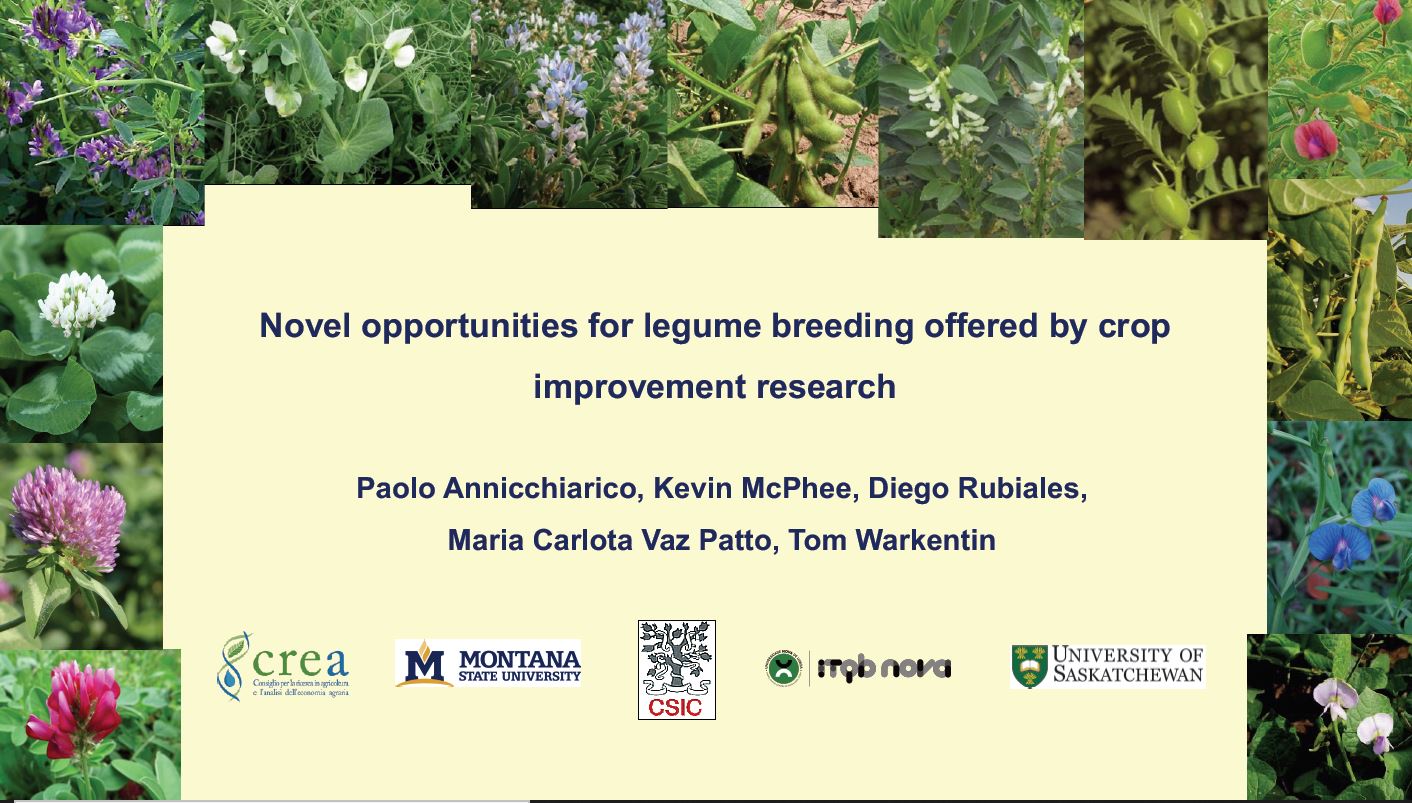 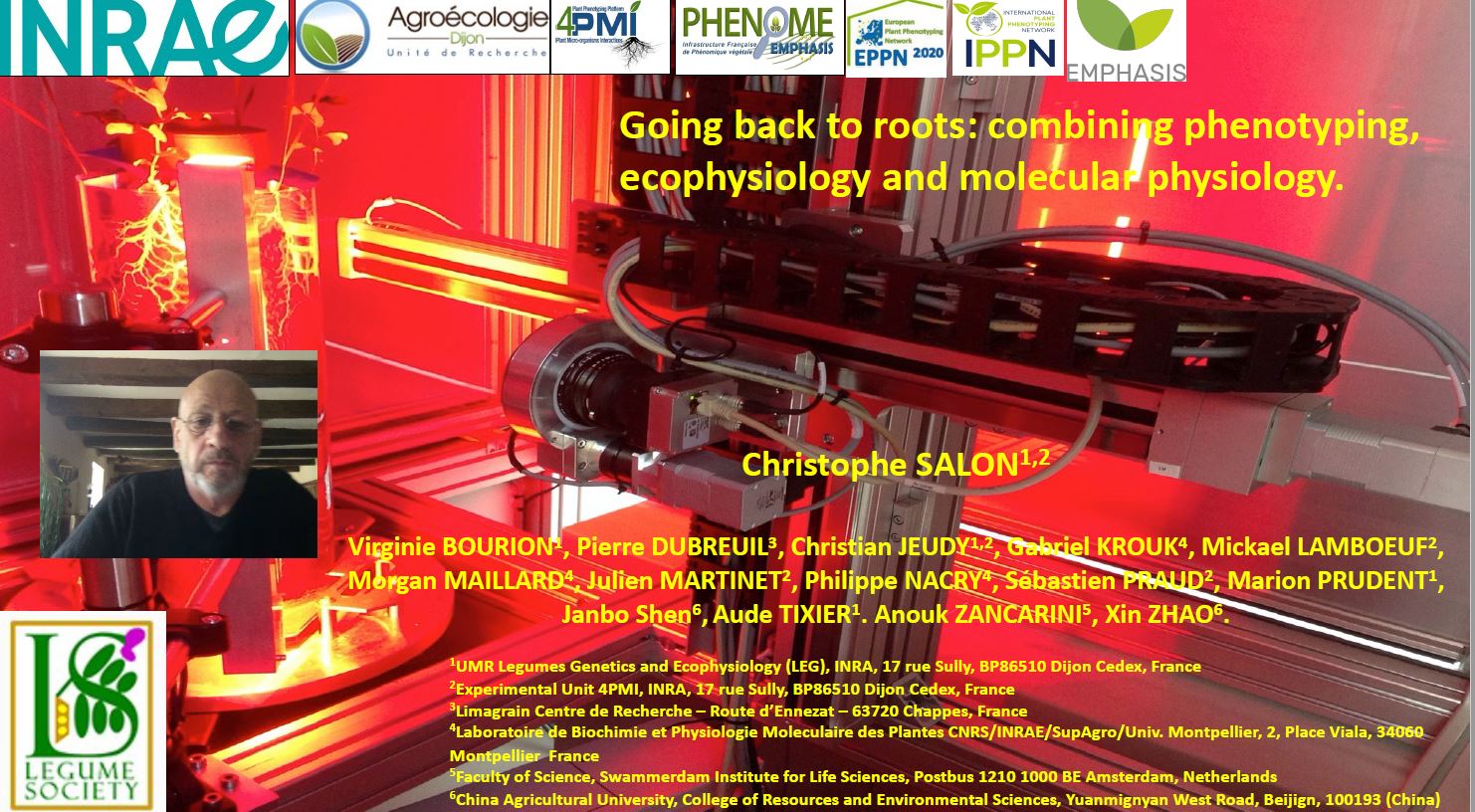 Going back to roots: 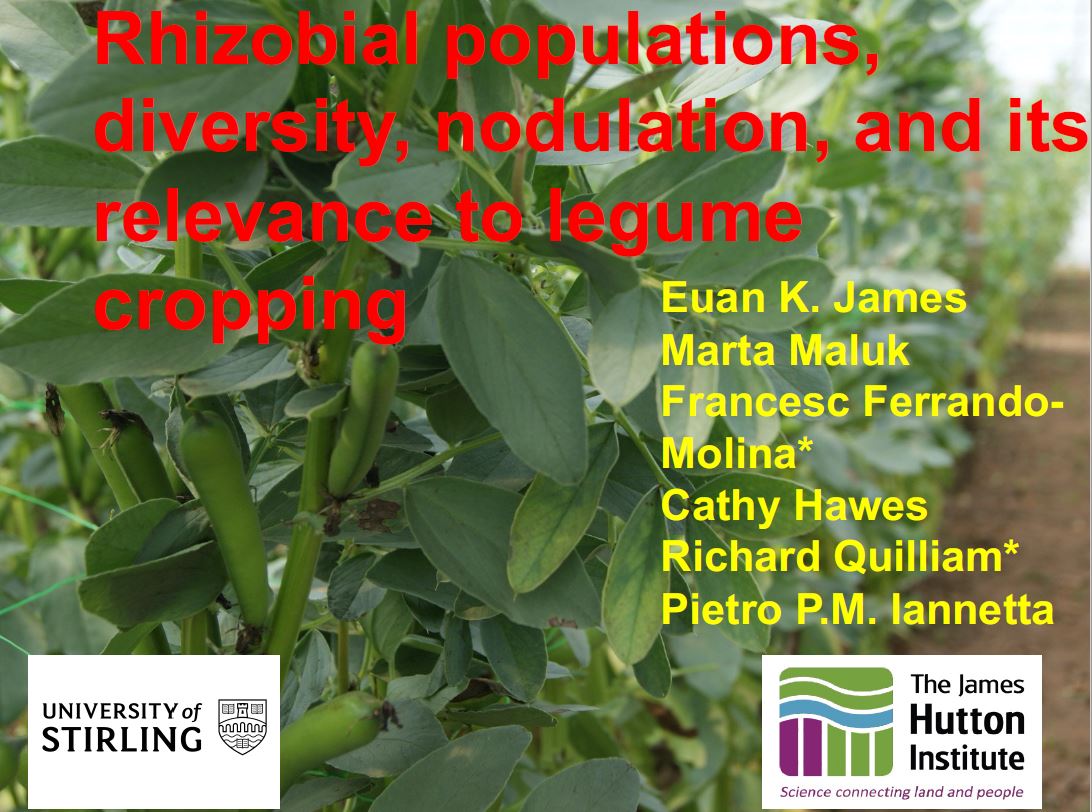 Rhizobial populations, diversity, nodulation, and its relevance to legume cropping 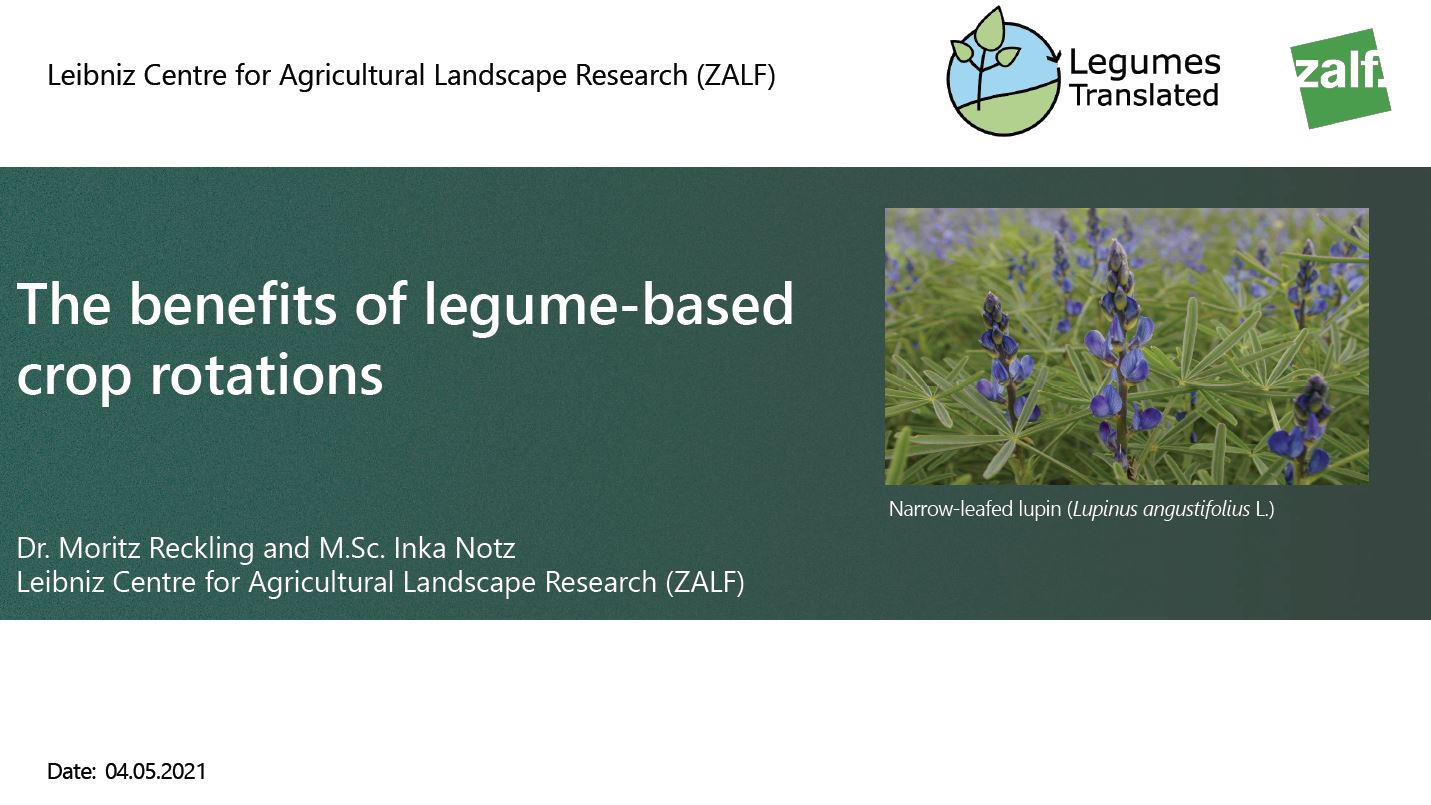 The benefits of legume-based crop rotations. 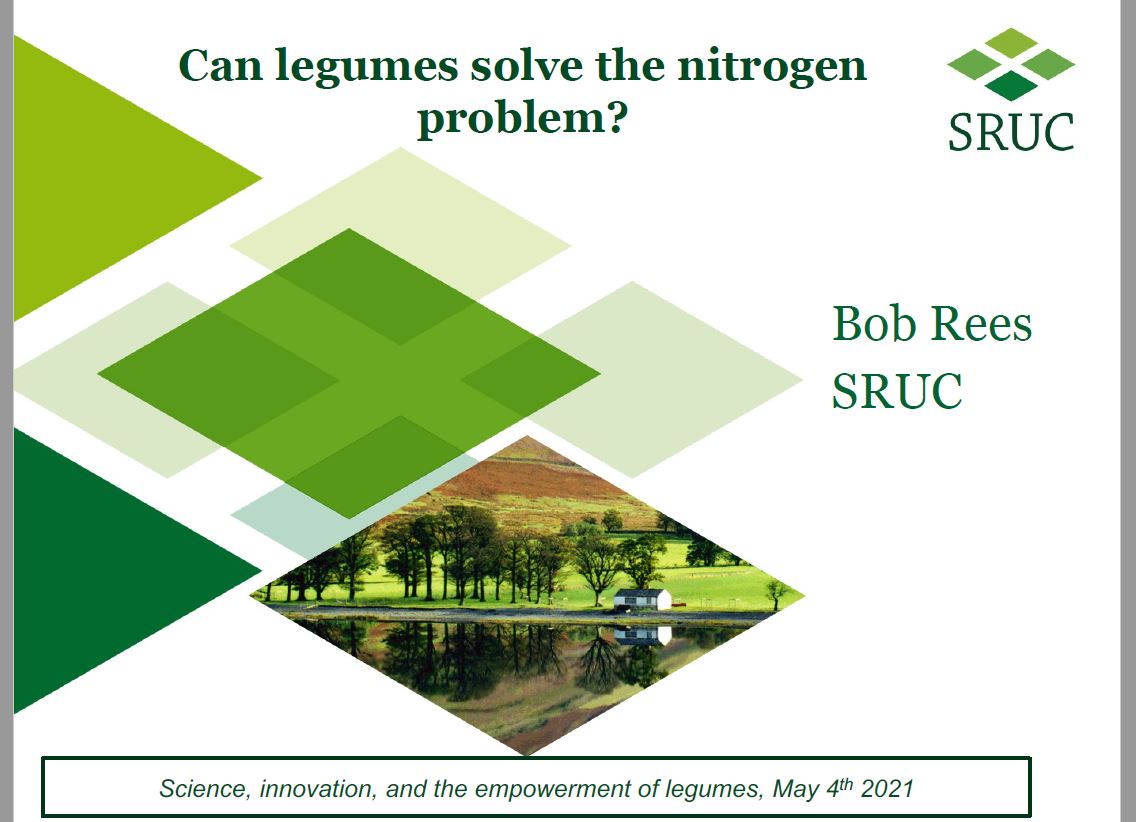 Can legumes solve the nitrogen problem? 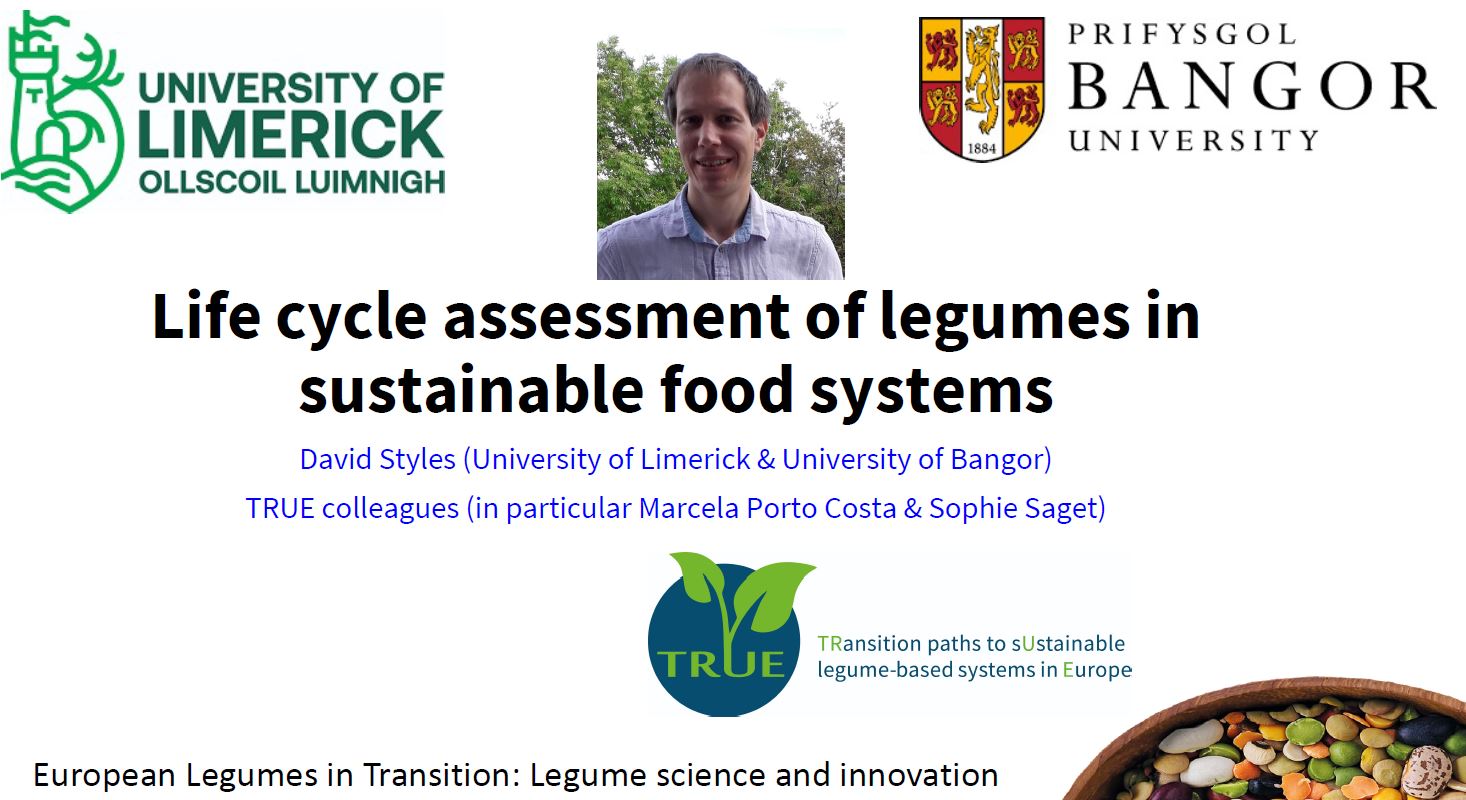 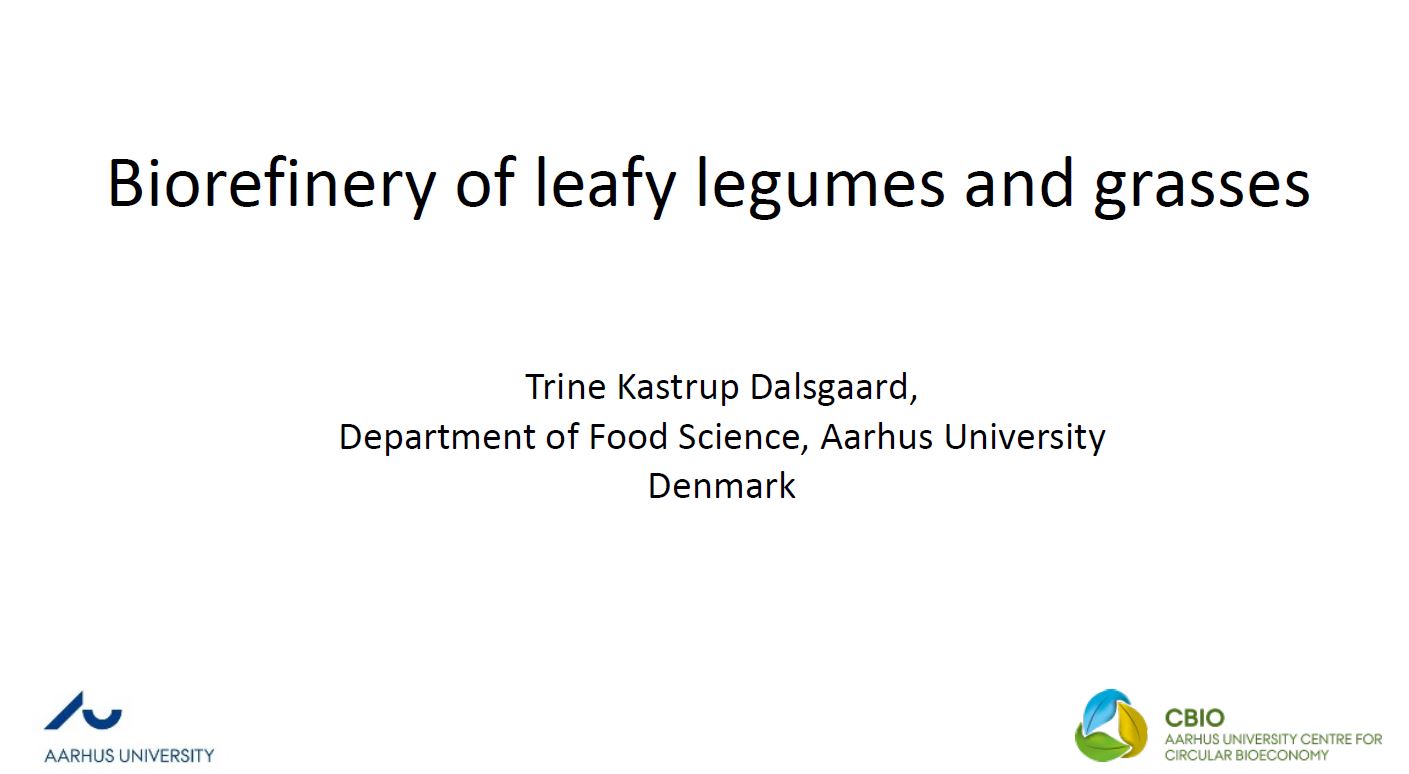 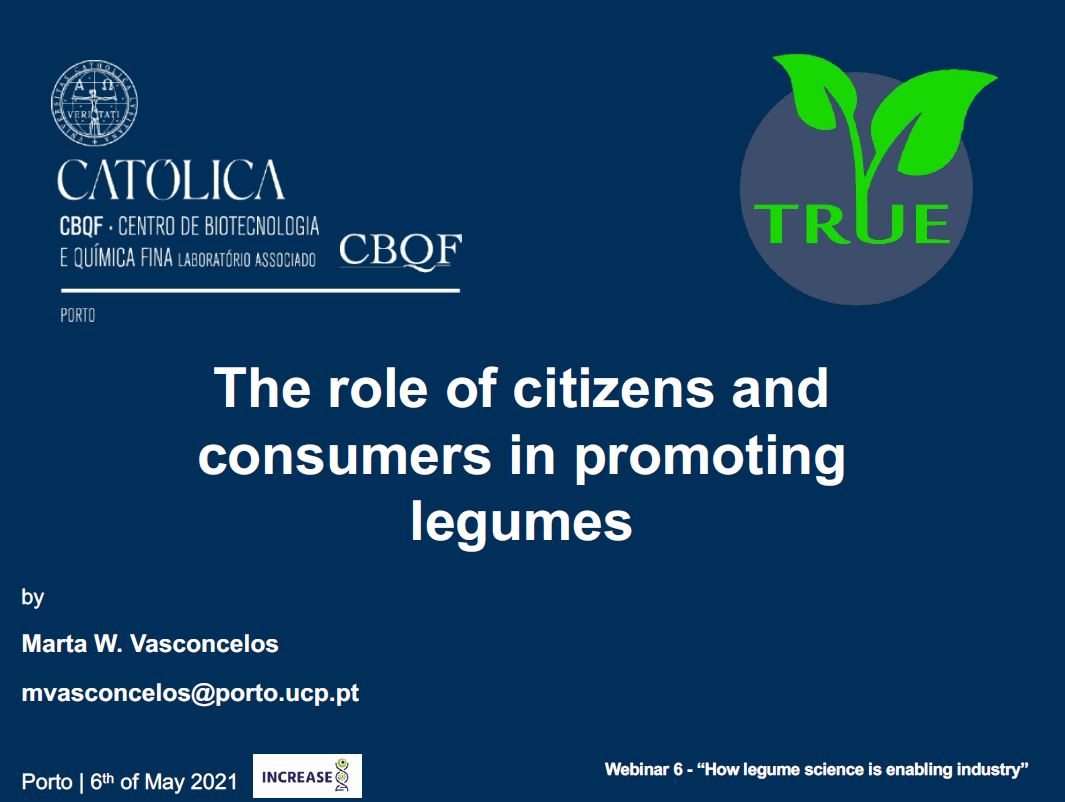 The role of citizens and consumers in promoting legumes 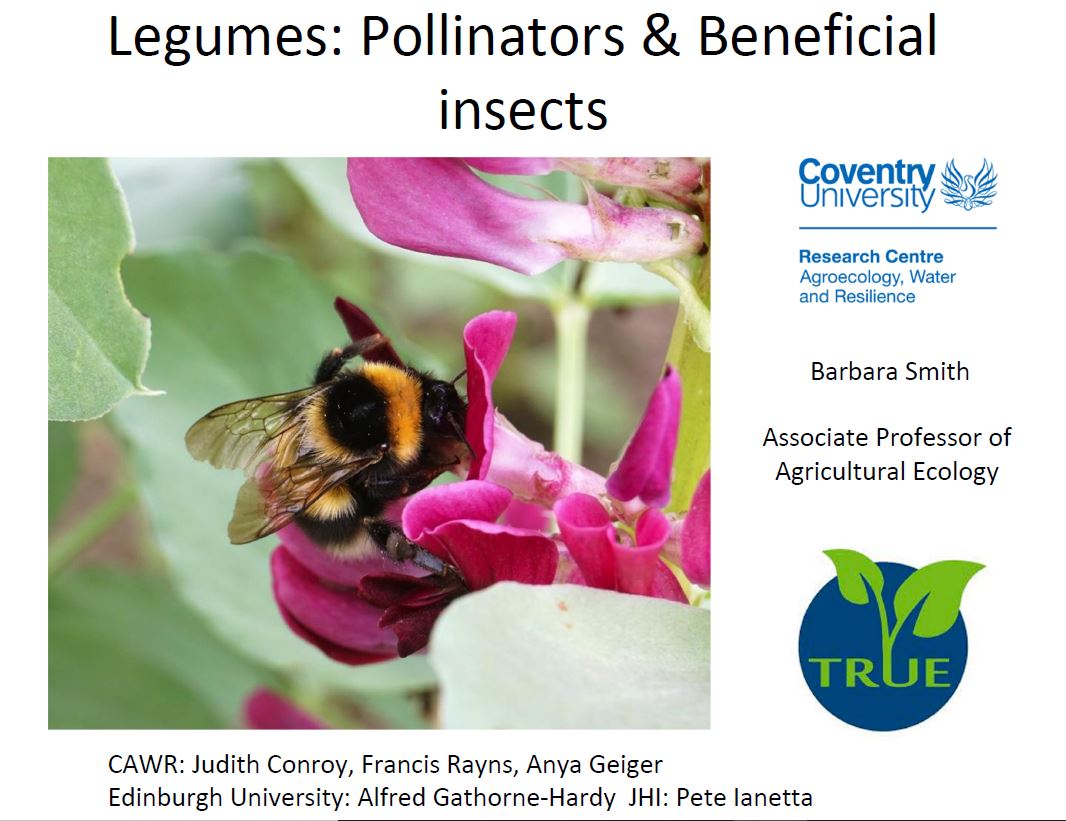 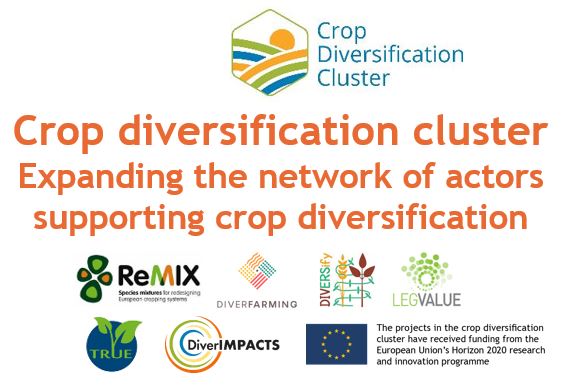 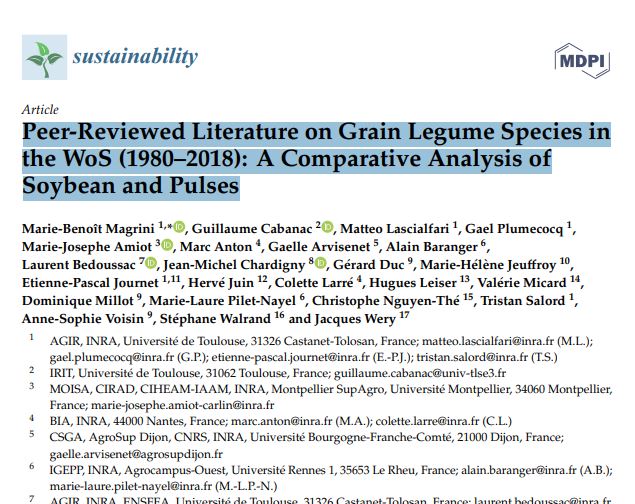