Summary
Legume crops provide a number of agronomic, environmental and nutritional services. Therefore, increasing their production area has been proposed as a key lever in the agro-ecological transition. But with less than 5% of agricultural land in 2018, legume production area remains very low in the European Union (EU). In this context, identifying legume suitable areas (i.e. regions where it is possible to achieve high and stable yields) appears essential. Here we developed a data-driven approach that combines observed crop yields in field experiments with machine learning techniques to model crop yield from climate inputs in the EU. The fitted models are then applied over the whole EU agricultural area to make yield projections under historical climate (2000-2020), for 5 grain legumes: soybean, field pea, fababean, chickpea and lentils.

Crop yield data were obtained from an updated version of the dataset presented in Part A of the Deliverable D1.4 of LegValue. This updated version of the dataset is named the “European Grain Legume Dataset” (EGLD) and contains a total of 6488 yield data collected from published and non-published field experiments all over Europe ranging from 1973 to 2020. The EGLD was combined with a global climate dataset designed for crop modelling (JRA55-CDFDM-S14FD dataset). Crop yield was modelled as a function of 5 climate variables (minimum and maximum temperatures, rainfall, solar radiation, and reference evapotranspiration) defined at a monthly time step over crop-specific growing seasons. Growing seasons were defined based on observed sowing and harvest months in the EGLD, and winter and spring types were treated as separate crops for field pea, fababean, chickpea and lentil. The model was fitted using a Random Forest algorithm.

The overall predictive ability of the model is good, with an R² of 0.85 between observed and predicted yields across all crops based on cross-validation. At the individual crop level, the predictive ability of the model is very good for winter chickpea, spring lentil and soybean (R² ≥ 0.85), good for field pea and fababean (spring and winter) (R² ≥ 0.75), and medium for winter lentil and spring chickpea (R² ≥ 0.60). Distributions of model residuals were centred on zero, indicating no systematic bias. Model residuals showed no association with latitude, average in-season tmax and total in-season rainfall for any crop, indicating that the model performs equally well under, respectively, low and high latitudes, cool, warm, dry, and wet environments. However, the model over-estimates low yields and under-estimates high yields. Yield projections under historical climate (2000-2020) suggest high climatic suitability for most crops, as projections reveal large areas where projected yields are higher than the actual average national yield based on official statistics. High-yielding areas in Europe are identified for each crop.

Finally, the results of this work are also expected to support future research and development activities on grain legumes in the EU. We believe our results should help breeders to define genetic traits relevant for grain legumes adaption to current and future climatic conditions in the EU, and be of interest to seed companies for estimating the potential seed market for each legume crop (including winter and spring types). By identifying important relationships between climate and crop yield, this work should also provide a useful basis for any further research on the impact of climate change on the development of legumes in Europe. 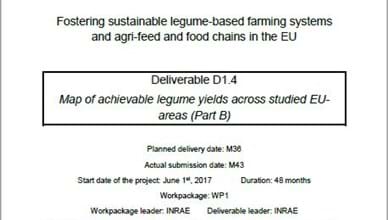