Introducing legumes to crop rotations could contribute toward healthy and sustainable diet transitions, but the current evidence base is fragmented across studies that evaluate specific aspects of sustainability and nutrition in isolation. Few previous studies have accounted for interactions among crops, or the aggregate nutritional output of rotations, to benchmark the efficiency of modified cropping sequences. We applied life cycle assessment to compare the environmental efficiency of ten rotations across three European climatic zones in terms of delivery of human and livestock nutrition. The introduction of grain legumes into conventional cereal and oilseed rotations delivered human nutrition at lower environmental cost for most of the 16 impact categories studied. In Scotland, the introduction of a legume crop into the typical rotation reduced external nitrogen requirements by almost half to achieve the same human nutrition potential. In terms of livestock nutrition, legume-modified rotations also delivered more digestible protein at lower environmental cost compared with conventional rotations. However, legume-modified rotations delivered less metabolisable energy for livestock per hectare-year in two out of the three zones, and at intermediate environmental cost for one zone. Our results show that choice of functional unit has an important influence on the apparent efficiency of different crop rotations, and highlight a need for more research to develop functional units representing multiple nutritional attributes of crops for livestock feed. Nonetheless, results point to an important role for increased legume cultivation in Europe to contribute to the farm and diet sustainability goals of the European Union's Farm to Fork strategy. 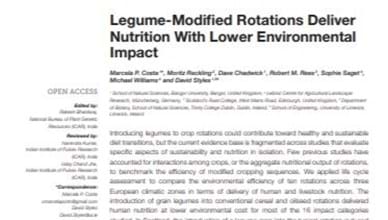