D1.4 Map of Achievable legume yields across the EU

One of the objectives of LegValue WP1 is to try to shed light on major agronomic constrains to a wider adoption of pulses among European farmers and to determine the actual yield potential of the most common pulses grown in the EU:

In this document “D1.4 Map of achievable legume yields across studied EU-areas (Part A)” we report the major outcomes of a dataset on grain legumes yield built in Task 1.2. The dataset was primarily intended for consolidating scientific data necessary to feed the modelling exercise adopted for the production of European maps of grain yield potential for the major pulse species (soybean, field pea, faba bean, chickpea, lentils), that will form the second part (Part B) of the D1.4.

The dataset that is being made publicly available consists of data coming from scientific papers published on international journals, that are complemented with data from LegValue Task 1.2

By outlining the 5244 entries of the dataset, we preliminarily explored the relationships between the grain yield of the five legumes and environmental (soil, climate, latitude) and agronomic (tillage, irrigation, fertilisation, weed control, organic farming practices) aspects. Grain yields varied a lot in function of pedoclimates but possibilities of cross-fertilisation among locations and contrasting conditions were identified in terms of knowledge transfer and establishment of future research.

Among management practices, special emphasis has been given in former studies on crop genotype, an evidence contrasting with poor resources allocated so far for the genetical improvement of these crops. The high presence also of combination between genotype and other management aspects reveals the high interest within the scientific community in developing new plant material adapted not only to a range of environmental conditions but also consistent with management practices.

In this “Part A” of the Deliverable 1.4 we also anticipated the preliminary results of the modelling activity performed on soybean yield data that were estimated by different algorithms based on former analysis on global dataset linking yield levels with climatic conditions. The preliminary tests performed on soybean yield estimations were very positive.

This modelling approach will be then fed in the next 6 months with the yield data of all the 5 major pulses considered and included in the dataset in order to refine the validation of the model and to be able to produce more reliable yield estimations and more accurate yield maps. 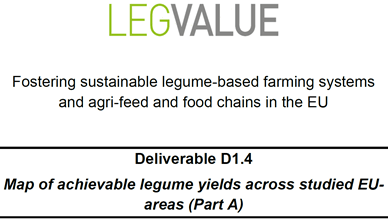